My coaching client Hakki Akdeniz, whose TED talk has been viewed more than 2 million times, has received a 2022 Carnegie Foundation Award for “Great Immigrants, Great Americans.”

Recently I had the privilege of coaching Hakki for his TED talk in which he tells the inspiring story of his journey as a 21 year old penniless, homeless, Turkish immigrant in NYC to successful entrepreneur, philanthropist and advocate for the homeless. Twenty years ago Hakki came to the United States speaking no English, $240 in his pocket and the promise of a job that never materialized. With courage and indominable drive, he has achieved the immigrant dream yet embraces the principle of “giving back.” 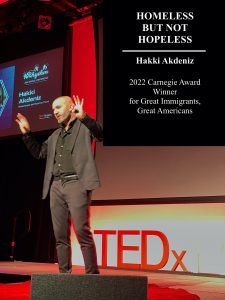 If you enjoyed this article, you might also enjoy: